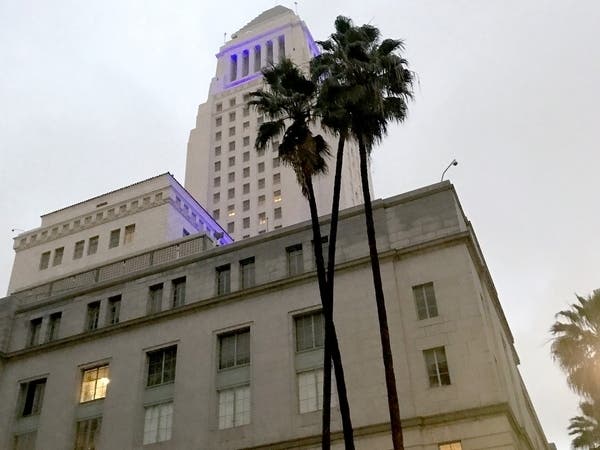 LOS ANGELES, CA — KKK hoods, drawings of nooses or lynchings, strings of obscenities, racist and sexist diatribes — all have become the toll of public service at Los Angeles City Hall in recent years. The obscenities and slurs have become so common at City Council meetings of late, they are met with a banal ‘Thank You’ from the dias before moving on to city business.

However, in his return to the City Council after serving on the County Board of Supervisors, newly elected Councilman Mark Ridley-Thomas signaled his frustration with commenters who routinely test the First-Amendment. On Tuesday, Mark Ridley-Thomas Tuesday chastised racist and sexist remarks by public speakers, which he said the governing body has had to hear for years.

Ridley-Thomas, who was a county supervisor from 2008 until this year, said the council and the public should not have to listen to a “barrage” of hateful comments, and he called for the City Attorney’s Office to take preventative measures.

“This is a subjective zone of ruling, and it should not be tolerated,” Ridley-Thomas said. “It has to be discouraged in every way possible. It is incendiary. It is disruptive, not to mention it is fundamentally offensive and has no place.”

In 2014, the city paid $215,000 to settle a lawsuit filed by Michael Hunt, a Black man who was removed from a city commission meeting for wearing a KKK-inspired hood and a T-shirt with a racial slur on it.

The Los Angeles County District Attorney’s Office in 2016 decided not to file charges against Wayne Spindler, a regular at City Hall meetings, who turned in a public comment card scrawled with racist images.

On Tuesday, Armando Herman, who has been a gadfly at City Council meetings for years, unloaded his typical unfiltered deluge of remarks, trying to bait the council into addressing his outbursts by calling them every disparaging thing he could muster.

After such outbursts, council members who grit their teeth through that type of language typically reply to the comments with “Thank you, next caller.”

In the last 18 months, only a few times has the council stopped a meeting to address these matters, particularly when there were children brought to the Council Chamber on a field trip and were well within earshot of that kind of language.

Most public speakers do not resort to such discourse, and several speakers who followed Herman said they were dismayed that it has taken this long to try to implement a way to reduce the vitriolic comments.

Councilman Mitch O’Farrell said such comments have been the burden of the City Council for the last seven years, and he said hostile work environments are illegal and not tolerated in the private sector and shouldn’t be tolerated in the public sector.

“I speak on behalf of the tens of thousands of city employees who are subjected to this, this hostility and this harassment,” O’Farrell said.

O’Farrell said he would like to have the City Attorney’s Office weigh in on what could be legally done to curtail such public comments.

“I am completely sympathetic with what Councilmember Ridley-Thomas is saying,” said Strefan Fauble, the Los Angeles City Attorney’s Office representative to the council. “Unfortunately, the First Amendment really limits our ability to restrict remarks. Though racist and sexist … we’ve talked about this at length before, and it’s complicated, I know, but I would be happy, councilman, to talk to you in private about the legal issues involved here.”