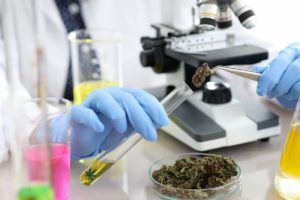 A Washington state proposal to require growers to test their recreational marijuana for pesticides and heavy metals is encountering blowback from industry officials who argue it would drive up their costs and force them to offer fewer cannabis products.

Up to now, Washington state is the only adult-use market that doesn’t require growers to test for pesticides or heavy metals, situation regulators are trying to fix.

“Not enacting quality controls puts Washington at the distinct disadvantage of being the only state with adult-use cannabis that is not tested for pesticides and heavy metals,” Casey Schaufler, policy and rules coordinator for the Washington State Liquor and Cannabis Board (LCB), said at a public hearing earlier this month.

The proposed rules – issued by the LCB – would require growers to test each lot as well as any concentrates for pesticides starting Aug. 1, 2021. Heavy-metal testing would kick in Jan. 31, 2022.

The LCB also is proposing to increase the marijuana flower lot size from 5 pounds to 10 pounds.

The COVID-19 outbreak has delayed the rulemaking process.

According to regulators, the proposed rules would cost up to $400 per test – a difficult pill to swallow for growers who have seen their margins shrink in recent years amid falling prices and a glut of marijuana on the wholesale market.

Growers also contend that the rules should be harvest- or farm-based, not in self-selected 10-pound lots.

Cultivators think the tests should be done at the farm while the plants are in the field or after they’ve been cut down for harvest – not in samples submitted by the businesses.

Cultivators believe the former method, where the LCB could visit grow sites and take samples either when the plants have been cut down or are still in the field, provides a more accurate and trustworthy test result.

The LCB took comments on Nov. 18 from the cannabis industry in a virtual public hearing about the proposed rules.

At the meeting, recorded by Gregory Foster, founder of Cannabis Observer, the LCB pointed out that this public comment period has been ongoing for 2½ years.

Foster provided the recording of the meeting to members of his newsletter.

Schaufler estimates it would cost growers anywhere from $165 to $400 per sample to test for pesticides and heavy metals.

Testing labs may work with licensees during the phase-in period to lower costs, Schaufler said.

He added that the full suite of tests would not be required until the final phase-in period that begins Feb. 1, 2022.

Schaufler noted that in the event of federal legalization, Washington state-produced cannabis would not be eligible for interstate transport if the cannabis doesn’t meet the same testing standards set by other states.

Pesticide and heavy-metal testing for all products has already been practiced by some of the state’s cannabis licensees who have taken it upon themselves.

That cannabis is tested at harvest level, and at the time regulators can also verify growers are following other compliance rules, such as pesticide storage and protective equipment use among workers.

According to the Cannabis Observer’s Oliver, the meeting drew a “huge turnout,” with nearly 50 people signed up to testify in universal opposition – not specifically against pesticide or heavy-metal testing.

Rather, industry officials want to ensure the rules are developed in a business-friendly manner.

The LCB extended the public comment period that day because it ran out of time to take all the feedback.

At the meeting, Micah Sherman, owner of producer/processor Raven Grass in Olympia, said these rules would cost smaller farmers more money to comply than large producers.

“We need an approach to testing at the broad farm level combined with random testing of finished products in stores and at farms,” he said.

She acknowledged the dangers and risks associated with pesticides but highlighted the need for the LCB to adopt “smart testing that would not put them out of business while protecting the integrity of the results.”

Oliver argues that this testing scheme will affect the industry in several other ways.

For one, smaller cannabis farmers will likely grow fewer strains of the highest potency to save money.

According to Oliver, if a grower currently produces a 500-pound harvest of the same strain, that cultivator would either use pesticides on the entire crop – or none at all.

But, under the proposed rules, “you’re required to prove 50 times you didn’t use pesticides on that harvest,” she said.

Right now, many craft growers produce less than 5 pounds per strain. But with each cultivar a grower produces, a new test is required.

To reduce costs, cultivators will stick to the best-performing strains – typically those with the highest THC percentage, as consumers still shop based on potency.

Smaller growers, in turn, will find themselves less competitive with larger farmers who can afford to produce a more diverse list of strains.

Oliver said outdoor-grown cannabis is selling for $1.75 a gram; a couple of years ago, it was at 50 cents a gram.

“(Craft cultivators) are not going to be able to raise their prices,” Oliver said. “They’ll have to modify their business model.”

Bart Schaneman can be reached at [email protected]